Johannesburg, South Africa. 30 November 2020 — On the backdrop of increased fighting across Mozambique’s North between government forces and ISIL-linked terrorist groups, coupled with continued insurgency throughout Lake Chad and West Africa’s Sahel, a recent multinational study indicates that Africa’s youth sees terrorism as one of the biggest threats facing the future of the continent.

Over seven in ten (71%) report concerns about terrorism, findings from the inaugural African Youth Survey reveal, with the majority polled across the continent suggesting it had the second biggest impact on the development of Africa over the last five years.

Nearly 30% of young people identified ‘fighting terrorism’ and ‘achieving peace and stability’ as the most important issues that require urgent action for the African continent to progress and move forward. Alarmingly however, nearly 10% have already been approached or know someone who has been approached or even recruited by terrorist organisations.

The African Youth Survey 2020, the most comprehensive survey of Africa’s youth, commissioned by the Ichikowitz Family Foundation, polled 4,200 participants (aged 18-24) from across 14 sub-Saharan African countries, including Congo Brazzaville, Ethiopia, Gabon, Ghana, Kenya, Malawi, Mali, Nigeria, Rwanda, Senegal, South Africa, Togo, Zambia and Zimbabwe; carried out to develop foundations for a better global understanding of a demographic that is all too often misunderstood.

The greatest concern about terrorism was concentrated in East (78%) and West African (76%) countries. In Southern Africa, 66% of youth were concerned. The rise of terrorism (15%) was identified as the event that had the second biggest impact on Africa in the last five years; in first place was ‘deaths from infectious diseases’ (24%). 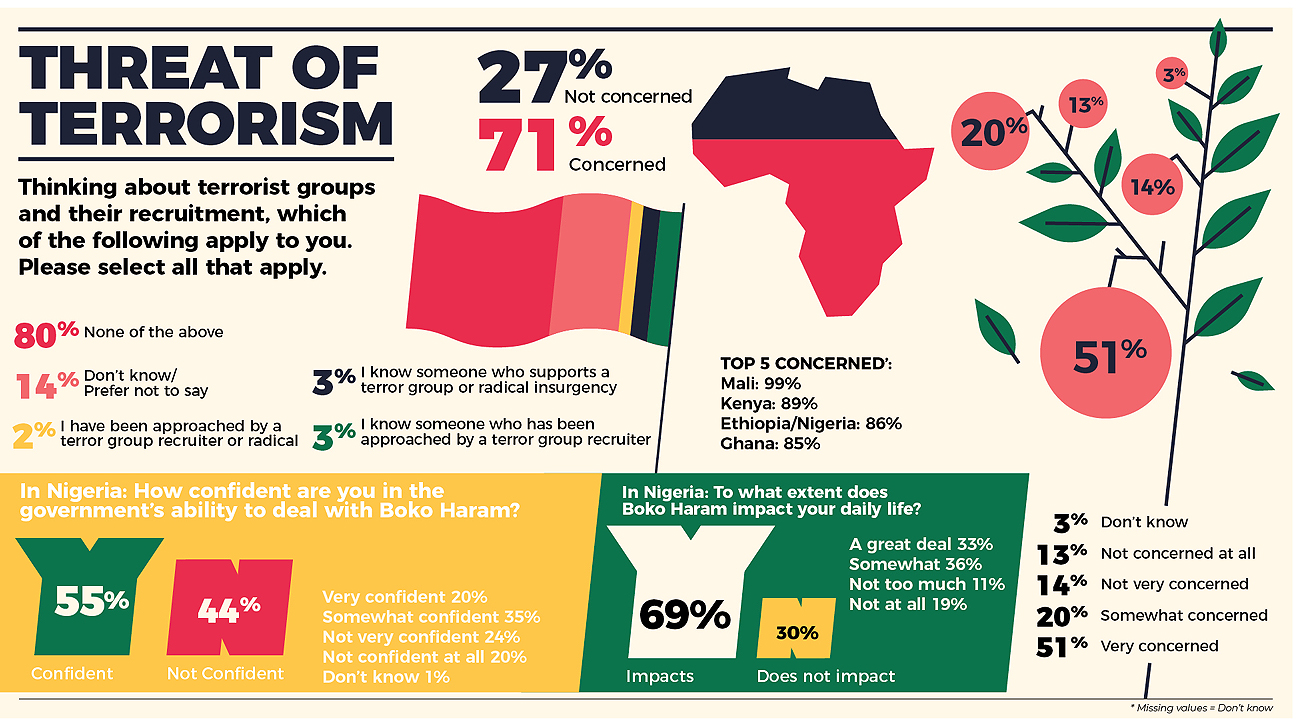 Looking ahead to the next five years, concerns of terrorism are viewed as the sixth-biggest issue facing the continent, with corruption and job creation viewed as the most pressing issues that must be addressed to move the continent forward. When asked about which issues are young people most concerned about in their country today, terrorism drops to the ninth position; unemployment and corruption remain the top issues wherein young people are presently the most concerned.

In an effort to offer greater insight on how individuals – especially young people – are co-opted into terror organisations, the African Youth Survey pointedly included questions on association with extremist networks.

Respondents were asked if they or anyone they knew were ever approached by a terror network.  While eight in ten overall reported that they have never been approached by or associated with such groups, a sizable number of participants responded that they “did not know” or “chose not to answer.”

These pronounced concerns about terrorism stand in stark contrast to the strong optimism respondents voiced about their futures, that of their respective countries and Africa as a whole within the Survey. 82% said their outlook for their financial situation was better over the next two years, while 70% consider themselves actively involved with and committed members of their communities.

The Ichikowitz Foundation has strived to raise greater awareness as to how best intercontinental and global collaborations combined with innovative solutions can address this growing challenge.

“Despite a decrease in conflicts across Africa, we have witnessed a rise in terrorism in large parts of our continent; ISIS is taking root as far south as Mozambique; Al-Shabaab controls much of southern Somalia and even small pockets in Kenya along the Somali border. In Ethiopia, a nation subject to attacks from Al-Shabaab along that same border, there are also today increasing fears of outright civil war, threatening the continued development of Africa’s second-most populous country,” stated Ivor Ichikowitz, South African industrialist, philanthropist and Founder and Executive Chairman of the Ichikowitz Foundation.

“While perhaps a fleeting headline flashing across news screens abroad, here in Africa, our study indicates that our young citizens are nearly one degree of separation away from extremist violence. They are the targets for recruitment by terrorist organizations, factions that have historically and routinely exported their tactics and their members abroad”.

Ichikowitz continued: “While the threat of terrorism was once the second-greatest issue to the thousands polled in over fourteen Sub-Saharan African nations, it is today the ninth and this is cause for optimism. However, to ignore the obvious ground game underway by violent extremists casting doubt on the African century would be a glaring omission for any government. Action must be taken urgently to avoid the spread of terrorism and its evolution in to a much bigger problem for our continent and the world”.

“One of the major reasons that our Foundation focuses so much of its time, energy and resources on conservation initiatives such as anti-poaching is because we have concrete proof that this illegal activity helps to fund terrorism and finance organised crime on the continent of Africa and beyond. We are not only looking to preserve the beautiful wildlife, biodiversity and heritage of Africa, but aiming to cut one of the major sources of funding to such devastating and cowardly activity undertaken by those that have stifled the safety, security and ultimately, ambitions of our next generation, as our Study indicates,” Ichikowitz concluded.

The Ichikowitz Family Foundation understands that discerning findings such as these can be used as valuable resources in informing good public governance and corporate social responsibility (CSR), and therefore plan to administer the Survey on an annual basis in future.