The importance of preserving African history for posterity

The real history of Africa, including South Africa’s liberation struggle, resides in the stories of the people who helped shape that history. But these stories, often transmitted in fragile oral form, are in danger of being swept away unless preserved and protected, which an exciting project in South Africa has set out to achieve.
Writes Ivor Ichikowitz.

My immediate reaction was one of disbelief; I wondered how this child was unaware of the struggle and where we as South Africans had come from. How can he not understand the impact of apartheid? I asked myself.

But on reflection, I realised that being born in 1994, he would have no real understanding of this history. It was not part of his sphere of reference.

I also realised that many of his generation, and those perhaps older, were in the same boat. As so often happens, the concerns of day-to-day life and events tend to overshadow the past and significant aspects of history, so essential to understanding the present, often slip away and are relegated to dusty academia.

I was, and am, convinced that in order to better understand our history, for people of my son’s generation, it’s not as much about place and events as it is about people. What really struck me was that in South Africa, we had a very limited window of opportunity to capture the history of the struggle and constructive engagement through the real stories of people and the unique personalities that made the history.

To make up this shortfall, made obvious to me by my son’s question, we founded the AOHA as one of the key programmes of my foundation, the Ichikowitz Family Foundation.

In South Africa, we had a very limited window of opportunity to capture the history of the struggle and constructive engagement

The Foundation commits resources to the kind of active citizenry that champions the preservation of our heritage, the conservation of our environment, the education of our people, and actively promotes nation building.

We started the AOHA with gusto, knowing we had limited time before some of the history-makers passed on.

Much of our history was politically sensitive, or considered subversive; some of it has remained hidden, even forgotten. So AOHA was created as a global effort to record and showcase both the continent’s acclaimed and unknown historymakers, giving unprecedented access to all those who were at the heart of events that shaped South Africa and Africa’s modern history. These narratives are the entry points for us, young and old, to embark on the journey to know our past.

In a South African context, we now have probably one of the largest libraries of original testimony from the players and also the luminaries who were involved in the struggle; and not just from one side, not just from the African National Congress or the apartheid regime.

We believe that we should be gathering perspectives from everybody that was involved in shaping our history. This includes stories from external forces such as the Americans and Cubans, and ranges from the perspectives of presidents and political elites to those of soldiers, as well as, for example, the mothers of activists.

It’s become a passion for me and I think, irrespective of our politics today, those of us who have lived through liberation struggles and other conflicts across Africa have an obligation to ensure that we contribute to the continent’s future by preserving its rich history for future generations.

It has developed into a fascinating project, as part of which, many untold stories have been uncovered. For example, one such story, which we have turned into an acclaimed documentary examines the critical role that the “Frontline States”, namely Angola, Botswana, Zambia, Tanzania, Mozambique and Zimbabwe played in South Africa’s liberation struggle.

We now have probably one of the largest libraries of original testimony from the players and also the luminaries who were involved in the struggle; and not just from one side, not just from the African National Congress or the apartheid regime.

We interviewed African leaders such as Joachim Chissano, Sir Ketumile Masire, Thabo Mbeki and Denis Sassou Nguesso, as well as Winnie Madikizela-Mandela, all of whom reveal why the Frontline States put themselves in harm’s way for South Africa’s liberation struggle. It is a proud African story of unity against oppression and an important history lesson for the continent’s future leaders.

The rich and extraordinary content has enabled us to develop educational packages for schools, broadcast documentaries, books, feature films, art collections, the performing arts and dialogue forums, to bring Africa’s history alive in a vivid and interactive manner.

But the archive is not just about preserving Africa’s modern history, it’s also a tool to encourage debate and dialogue around current issues that are shaping our future. It’s a tool to promote democratic values and good citizenship.

Today, the challenges of being a responsible, effective citizen are more diverse, nuanced and complex than in the past. Sustaining democracies, strengthening economic competitiveness and meeting local, national and global challenges demands a broader vision of citizenship for the 21st century.

Millions of South Africans were touched by the campaign, which included innovative art forms, such as beatboxing (a form of vocal percussion), fine art, sand sculptures, graffiti and mural walls, drama performances, heritage tours, and an award-winning TV series, in order to reach the widest possible audience.

It is our objective to expand the reach of the AOHA from Southern Africa to the rest of Africa, capturing more inspirational stories, and sharing them in innovative ways that have lasting educational value, so as to provide strong examples of how we can all be good citizens by creating positive economic, political, and social change.

The archive is not just about preserving Africa’s modern history, it’s also a tool to encourage debate and dialogue

One day, when we are all gone, students and researchers, as well as ordinary Africans, will hopefully be able to get to know the individuals who shaped the most important historic moments in Africa and make up their own minds about them – at a human level.

In the words of Spanish philosopher and poet, George Santayana: “Those who cannot remember the past are condemned to repeat it.” 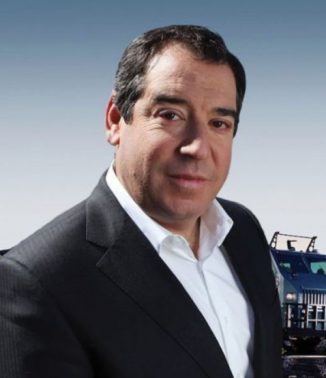 Ivor Ichikowitz is an African industrialist and philanthropist. He is the Founder and Chairman of The Ichikowitz Family Foundation.